The Importance of Density Altitude in Aviation

Our atmosphere is a dynamic system with variations in pressure, temperature, humidity and precipitation typically seen throughout the day across a relatively small area. These changes in the local environmental conditions cause associated changes to the air density, which plays a crucial role in determining aircraft performance.

Losses in aircraft performance are most noticable during takeoff and climb out at high altitudes, and on hot days.

Air density is driven by three primary factors. These are altitude, local pressure variations, and local temperature variations. Humidity also has an effect on the air density but to a lesser extent.

The atmosphere is in a constant state of flux due to global and local weather phenomena. Since local conditions vary at all places and at all times aeronautical engineers work with a theoretical atmosphere model when performing aircraft performance analysis calculations such as those that appear in aircraft Pilot Operating Handbooks. This atmosphere model is referred to as the International Standard Atmosphere and provides a mathematical model describing how pressure, temperauture, density and viscosity vary over a range of altitudes from sea level to 80 km.

The AeroToolbox Standard Atmosphere Calculator has proven to be a popular tool which outputs the relevant atmospheric properties given an altitude and temperature or temperature offset from standard.

Sea level standard conditions are very important from an aviation stand point as airspeed indicators are calibrated on the assumption that the aircraft is operating at sea level on a standard day.

Of course there are very few instances when an aircraft is actually operating in these standard conditions, and as such the true airspeed will usually differ from the indicated airspeed — oftentimes by a substantial amount. You can play around with our Airspeed Conversion Tool to see this in action. The tool is especially useful when wanting to calculate true airspeed given indicated airspeed and an operating altitude.

To show the importance of the prevailing atmospheric conditions on aircraft performance you only need to open any aircraft POH to the section dedicated to takeoff performance. The example below is from a Piper PA-28-121 Archer II manual and plots the variation in takeoff performance with pressure altitude and operating air temperature at a flaps 25 setting. The pressure altitude corrected for the operating air temperature is of course the density altitude. 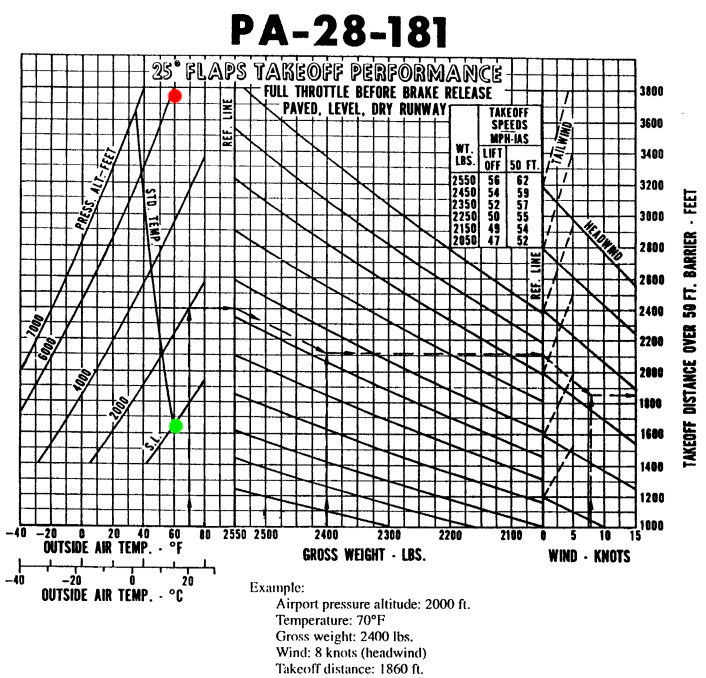 This is a great example of the effect that density altitude has on performance. An airport at 5000 ft elevation with an outside air temperature of 32°C has a density altitude in excess of 8000 ft. This is why it is so important to know and understand your aircraft and it's performance limitations before embarking on a flight — especially at or near gross weight on a hot day at higher altitudes.

The pressure altitude \( \left( \textnormal{PA} \right) \) is determined from the airfield elevation and the local QNH using a formula published by the National Oceanic and Atmospheric Administration (NOAA).

The altitude output is in feet and the QNH value must be converted to milibar (mb) before being used in the equation.

QNH is often given in hectopascal (hPa) which is the same an millibar.

To calculate the density altitude you first need to estimate the current atmospheric pressure at the airfield. This is done by converting the pressure altitude calculated above to a static pressure using the standard atmospheric model.

The equations that follow all use the same set of constants which are added to the table below for easy reference.

The relative pressure term \( \sigma \) refers to the ratio of the atmospheric static pressure at a given altitude to that in sea level standard (ISA) conditions. The temperature should be converted to Kelvin for all proceeding calculations.

\( T_{i} \) is the standard temperature at the pressure altitude.

Once the relative pressure \( \sigma \) is known then the static pressure corresponding to the pressure altitude follows.

\( P_{PA} \) is the static pressure corresponding to the previously calculated pressure alltitude (function of QNH).

The density altitude is then determined using the ratios of the pressures and temperatures between the actual atmospheric conditions and that of the standard atmosphere model at sea level.

\( P_{PA} \) is the pressure corresponding to the previously calculated pressure alltitude (function of QNH).

A common approximation method for calculating the density altitude is presented below. These equations are generally used by pilots before getting airborne on hot days at or near gross weight. We would suggest rather bookmarking this page and making use of our calculator, but the density altitude calculation as presented here is often used as an exam question during the theory portion of the PPL.

To convert from airfield elevation to a pressure altitude when the current QNH is known:

If the QNH is given in inches of mercury:

If you are sitting in your aircraft then the pressure altitude can be quickly determined by setting your altimeter to 1013.25 mb or 29.92 inHg and reading off the resulting altitude.

The density altitude can be estimated using the pressure altitude as an input and the simple formula below.

\( T_{ISA} \) is the standard temperature at the given airport elevation in °C.

The variation in standard temperature with altitude can be approximated between sea level and 36 000 ft by the following equation:

Calculate the pressure and density altitude given the following conditions:

Then calculate the temperature deviation from standard:

These results compare well to the more accurate analysis performed in the calculator at the top of the page. 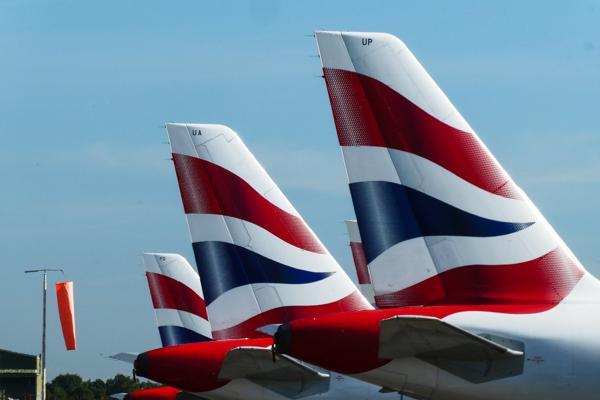